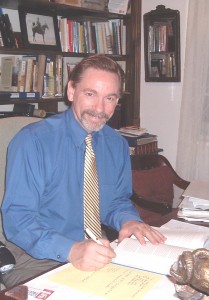 With three books and dozens of articles to his credit Ken R Knopp has written extensively about 19th century American history and horse culture, Confederate, Federal military and American civilian riding saddles; horse equipment; leather production; hardware; British military saddlery; Confederate accouterments, and the American saddle making industry. He is considered one of the most knowledgeable authorities on 19th century saddlery in the country today.
A native Midwesterner now living in Mississippi, Ken R. Knopp has spent most of his life living in, and in love with the culture and history of America and the Old South. With a B.S. degree in Agricultural Communications from Michigan State University he makes no claims of academia nor of being a “historical scholar” but rather a “lifelong student” with a passion for 19th century history. An unreconstructed risk taker and adventurer, Knopp blended numerous business pursuits and experiences from his varied background including 25 years in professional rodeo, real world adventures with horses as a working cowboy; rodeo cowboy; PR Man; movie consultant, extra, stuntman, and as an historian and writer, combined with his love for military history, saddlery and reenacting to produce some groundbreaking studies of American saddles and horse equipment. His first book, CONFEDERATE SADDLES & HORSE EQUIPMENT is widely acclaimed to be the most comprehensive study of the saddles and horse equipment manufactured and used by the legendary Southern horsemen. His newest project, AMERICAN RIDING SADDLES, 1790-1920 published in 2018 has set the bar for comprehensive understanding of 19th century American riding saddles, horse culture and their place in our nation’s history.

For most of his adult life Ken R. Knopp made his living in the world of professional rodeo rising to the top of his field marketing and producing some of the nation’s largest and most successful “indoor” PRCA rodeos and televised PBR Bull Ridings. His work in professional rodeo and as a horseman provided him numerous opportunities in several movies, documentaries, in television, live stage performances including the National Finals Rodeo, radio shows and public speaking engagements as well as writing PR material and feature articles for dozens of regional newspapers and industry magazines.
Ken grew up with a fascination for history. When he was six years old his father introduced him to local doctor James Cook, a former WWII combat surgeon and avid Civil War collector. Dr. Cook’s generosity, books and large collection of artifacts was the genesis for what would become a life long passion. As the son of a suburban pharmacist and with no background or familial connections to horses or the rodeo business, Knopp got his education at the “school of hard knocks”. As a teenager Ken owned horses and worked at a local stable. After high school he went to Michigan State University where he joined the Rodeo Team learning then competing in the roping and bareback bronc riding events. After two years he dropped out moving to central Florida to make a living “day working” cattle during the week then “rodeoing” on the weekends. A back injury, (and “good sense”) finally prevailed upon him to finish college. With an eye on a career in the “business” of rodeo Ken returned to MSU and graduated in 1981 with a degree in Agriculture Communications (the only degree which required no chemistry or math). Moving to Nashville he took a job as Publicist under rodeo marketing pioneer Bruce Lehrke and Longhorn Rodeo Company (formerly Loretta Lynn’s Longhorn Rodeo). It was under Lehrke’s excellent tutorage that he learned the trade working large indoor coliseum events in big cities all over the nation. In 1983 Ken formed his own independent company and began freelancing large and small events across the country as well as supplementing his income and experiences in other endeavors eventually including work in several “period” movies and commercials as a skilled background extra and stunt work.
It was during this time that Ken’s long dormant interest in military history and the Civil War was reawakened and led him into artifact collecting, historical research, writing, reenactments and movies. Over the next several years Ken worked several movie projects including the ABC blockbuster TV Mini-Series “North & South”; “The Alamo: The Price of Freedom” – A State of Texas IMAX movie production (still shown at the Alamo); Another “movie from a book”, TV Mini-series about Custer at the Little Big Horn entitled, “Son of the Morning Star” and, the hugely successful, Academy award winning movie “Glory”. Other film projects have followed.
By the early 1990’s, Ken’s rodeo career had him devoting most of his time to work with James Harper and Ralph Morgan’s, Harper and Morgan Rodeo Company, then the nation’s largest producer of indoor production rodeos. As Marketing Director, Ken was responsible for the advertising, sponsorships, event staffing and publicity at up to twenty to twenty-five events a year as well as producing, writing and acting in the company’s legendary theme inspired Opening Productions. These “live” short-dramas were so well respected the Pro Rodeo Cowboys Association (PRCA) hired the company to produce the 1990 NFR opening productions in Las Vegas. In 1994, back surgery permanently ended his horseback riding but not his enthusiasm for military history, research and writing. Over the next several years a growing career in the professional rodeo business, book projects and numerous articles absorbed his attentions. However, by 2001 Ken was growing tired of the politics and the extended road life inherent in professional rodeo. Married in the fall of 1989, the many weeks and months in travel away from his wife and daughter were taking a toll. Ken was “road-sour”. After twenty-six successful years in the business he simply walked away in the fall of 2001. Yet, even after he left the rodeo world he was recognized for his talent and rodeo business experience by twice being asked to return to Las Vegas to give keynote marketing seminars at the annual PRCA Rodeo Convention.
Ever the adventurer, entrepreneur and self starter, Ken wanted a completely different but independent path after rodeo. Quickly, but dramatically, he “traded horses” and was (somehow) immediately hired by Edward Jones Investments-one of America’s top brokerage firms. With no formal education in finance Knopp went at this opportunity with a focused determination. Just thirty-one months after being licensed as a Financial Advisor Ken was at the highest segment level of production for the firm. Recognizing his abilities the firm gave Ken additional opportunities and offered him several leadership positions. Quickly rising up the ranks, Ken is now one of Edward Jones’ top producers and also involved in leadership and training activities. When asked about his varied lifestyle and careers Ken says, “I have never been very athletic, smart or blessed with talent but GOD has thankfully given me a strong work ethic and then the ability to adapt, absorb, transform and, even occasionally, to excel where passion and opportunity have met.”
Today, Ken continues his love for history with numerous and continuous publishing projects and speaking engagements around the country. He writes constantly, has books in progress and contributes to several historical magazines and publishes articles nearly every year. In addition, a passionate speaker in patriotic and historical themes, Ken routinely speaks before historical associations and civic groups. At Edward Jones he devotes his time to his clients, training/motivating young financial advisors and volunteering at local historic sites and community efforts. As “just an old cowboy turned businessman” Ken gives all the Glory to his LORD Jesus Christ and says he is, “truly blessed beyond understanding”. He enjoys being at home on his small farm outside Hattiesburg, Mississippi with his gorgeous wife Heather and daughter Alexandra.

Over four dozen original articles published by the following magazines:

“In my travels, I’ve worked with dozens of celebrities: well known actors, athletes, country music singers, famous rodeo personalities and other so called ‘stars’. Most are self serving and insecure- not worth a damn! In my opinion, the real ‘stars’ in this life are those who serve others quietly-without expectations or profit, and to me personally- my family, close friends, dogs, horses and other influences that have made my life a helluva lot of fun!”

[Not a valid template]